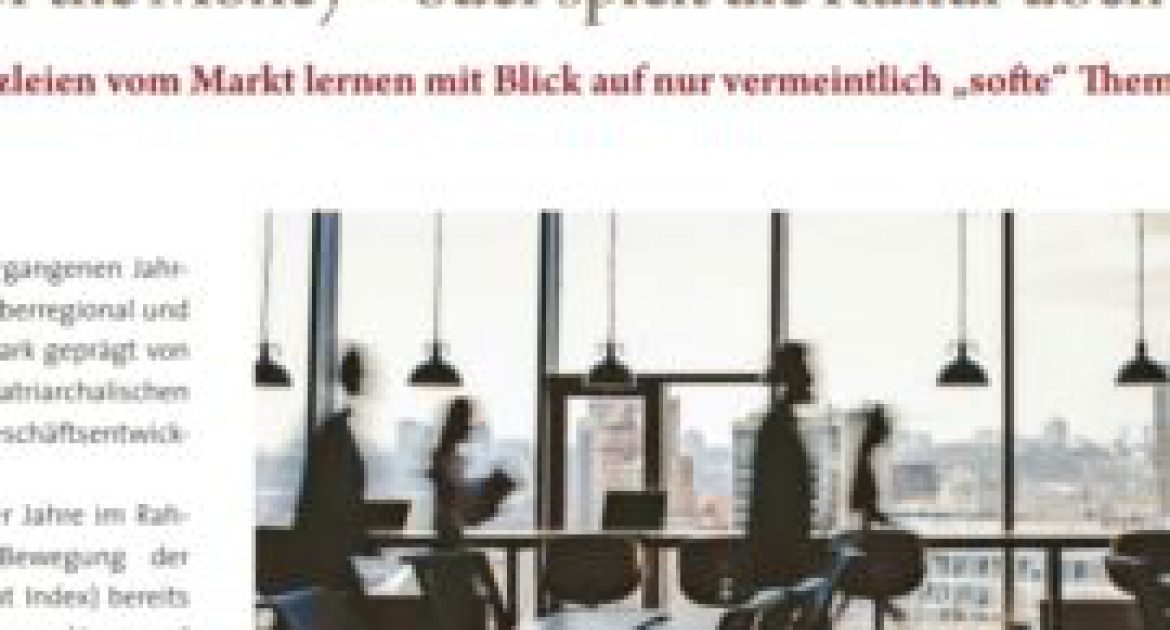 We´re only in it for the money – or does culture still matter?

The culture of national law firms in the last century was strongly influenced by their founder personalities, patriarchal style and the freedom of individual business development for each partner before the possibility to merge nationally and internationally.
At the end of the 1990s, the OCI factor (Organisational Commitment Index) was already a determining factor for strategies, industry rankings and variable remuneration components for executives in the economy as part of the Total Quality Management movement.
Until recently, shareholder value, economic growth, mergers and globalization had overtaken the importance of corporate culture.
Nowadays, this aspect of (leadership) culture has become more and more important. In addition to topics such as pro bono, CSR, diversity, gender ethics, which have long been recognised as a necessary evil by the last skeptic – not least because clients (not only) ask about them in pitches – the (leadership) culture of a law firm also plays a central role in the “war for talents”: Namely as a distinguishing feature in the choice of employer.
In every sector of the manufacturing and service economy (be it listed companies, medium-sized companies, consultants or small businesses) the following applies: the quality of cooperation, leadership styles, principles and values, topics that “how” do we work together, talk to each other rather than about each other, reward and develop individuals and teams are becoming more and more important. Self-conception and identity are the determinants of job satisfaction and these in turn (a) prerequisite for corporate success. The increasing change in values in parts of the population since the last decade has led to the fact that the good old nursery is becoming more important again for adults and the effects of this have long been reflected in the economic success of a company. Even if it seems trivial: too high a fluctuation rate not only increases costs, it also reduces success and productivity and often slows down the focus on the actual business goals. The “glue” falls by the wayside.

The much criticized Generation Y has long since sensitized the (in)understanding of values and goals beyond capacity utilization figures, sales hit lists, yellow cards and probation periods.  Taboo topics at the beginning of the new millennium have become a matter of course (parental leave for fathers, sabbaticals, etc.).
If one thinks beyond quarterly figures, year-end rallies and “annualy reviewed forecasts”, one will be even less able to ignore the topic with regard to the labour market. You are on a buyer’s market and this very prospective buyer (“my grades, my potential, my demands”) will get involved and use his human capital where he sees the greatest benefit for himself. And it will be just as machiavellian as some representatives of the successful generations of the current MP´s, OMP´s and MD´s: Loyality is for loosers. But over the past two decades, for many associates and partners, the key question has been: Where do I earn the most? So this question is more and more replaced by : Where do I feel most comfortable? And in most cases this is certainly the case without the much quoted, but in reality much rarer and scolded 9 to 5 attitude.

The Future has started

You don’t have to be an actuary to see that the ranks of baby boomers are going to thin out in the coming years and that part of the future and the success of a partnership will also be determined by the soft factors in the future.
Looking at the multitude of partner and team changes that have taken place in the last decade, a comparison of similar behaviour in the world of football quickly comes to mind. Here the purchase of some stars (vulgo: Investments in Human Capital) may and might still be worthwhile to be reckoned with through the sale of fan articles – playful success has sometimes fallen by the wayside just as much as reputation, trophy or table wins. In the past, efforts to give the topic of culture an appropriate meaning, especially in teams that have not grown organically, led to further hikes rather than the intention to take this topic more seriously. It is no longer a secret that the suitcase of the “portable business” is always larger at the departure than it is at its destination on landing.
Studies on the relationship between corporate culture and corporate success have been around for a long time – in industry, no matter in what industry. Studies in the world of law firms are still at the beginning of a development that has been around for a very long time. Recent history has taught us that some corporate perspectives also arrive and establish themselves in the world of law firms with a time lag – and much does not even begin with A, but begins with a C: CEO-CFO-COO-Career-Change – and culture as well.
Bundling the understanding of values ​​between different generations and the different occupational socializations of the much-cited Laterals now and in the future assumes an incomparably greater importance for the reputation, employer attractiveness and ultimately the common business success than in earlier times. Values ​​characterize attitudes, these determine our behavior and of that the success is not completely independent. Employee surveys – no longer a rarity in the world of law firms – can provide clues and indications for topics to be taken on board. Cultural analyzes go one step further and show connections and the corresponding fields of action and mechanisms of action.
A classic in this context should be mentioned: “Culture eats strategy for breakfast”.
So why not learn from the market this time? Preserving the existing will not be enough in the future.

Seminar | How to Achieve and Maintain Profitable Revenue Growth